Russian economy is now recovering from the 2008-2009 shock

Russian economy is now recovering from the 2008-2009 shock

Growth was above 4.5% last two years and should be above 3.8% this year. In comparison with recession in the OECD countries, this is a very good performance. 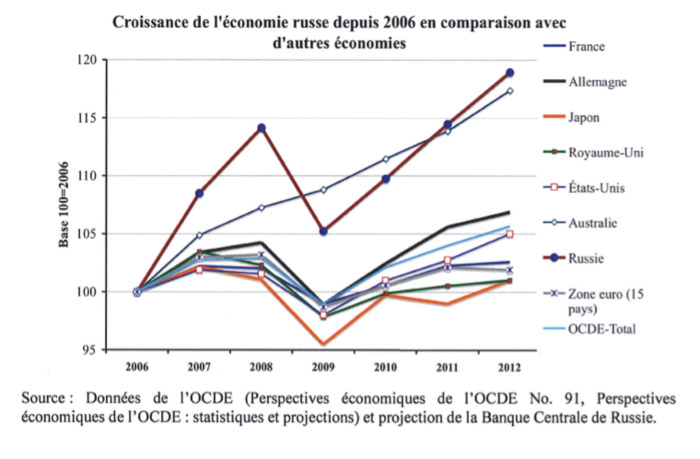 But a sustained growth implies constant innovation which is itself linked to investment and investment are made when decision makers believe there will be growth… Although positive in 2012, investment remains fragile and needs to be consolidated.

Libya & Irak are back almost full blast on the market. Europe, China, India and US economies are slowing down.

By 2015, Russia might face a current account deficit which will probably be avoided if the Rouble depreciates, but it will worsen the social environment. But not sure there any other way?

Unemployment went down to 5.2% in August 2012, which is historically low.
But there are strong disparities between the Moscow and Volga regions and for instance the Far East.
Considering that population does not move so easily, migration policies should be more active or effective.
Increase of social expenditures had positive results. Consumption has increased as well and is sustained by more social expenditures. Let’s remember that Vladimir Poutine agreed to raise wages an average 30% a year for budget workers.
Access to private credit also contributes to good consumption, thanks to the policy of the Central Bank.

Increase of social expenditures did not create inflation. In fact, it’s decreasing since 2008 and stabilised at 6.5%.
Productivity which was compromised in 2009 had positive swing in 2010, especially for transformation and construction.

Therefore, Russia maintains a good level in global competition, thanks to such productivity increase and regular devaluation of the Rouble.

We cannot see yet the impact of Russia joining the WTO.
During the first months of 2012, the trade surplus declined and the reason is in fact a decrease of exports. 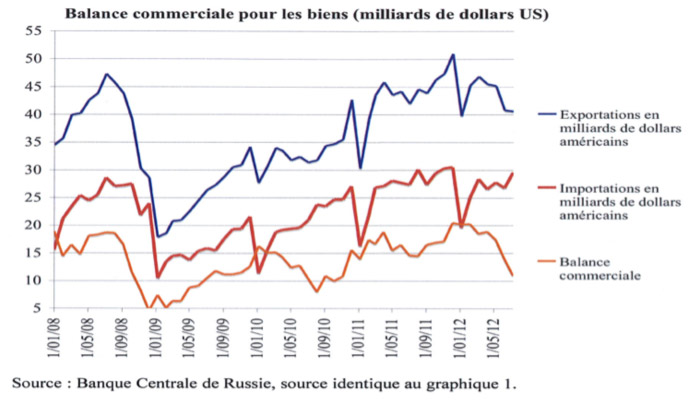 This may be an issue for the months and years to come.
In 2013 & 2014, Russia will face the economic slowdown of its main economic partners. Therefore, demand for energy will decrease and energy prices will decrease. For short term contracts, volumes will also decrease.
Subsequently, the question about how to best use or invest these reduced revenues will be accurate.

I will not spend time on this as we basically have to note that it is still weak and forces the State to intervene very heavily.
If the financial sector seems to be fine, in fact it can only be thanks to State and Central Bank support to the banks. From June 2011 until June 2012, MinFin and CB have in fact financed 40% of the volume of credit increase.
Overall, neither banks or equity markets or bonds have the capacity to provide their financial needs to Russian companies.

Three aspects are creating some uncertainty for the near future:

Considerable uncertainty exists regarding the size of the economically recoverable U.S. shale gas resource base and the cost of producing those resources. Across four shale gas resource scenarios from the Annual Energy Outlook 2012 (AEO2012), natural gas prices vary by about $4 per million British thermal units (MMBtu) in 2035, demonstrating the significant impact that shale gas resource uncertainty has in determining future natural gas prices. This uncertainty exists primarily because shale gas wells exhibit a wide variation in their initial production rate, rate of decline, and estimated ultimate recovery per well (or EUR, which is the expected cumulative production over the life of a well).

The issue for Gazprom are that:

One positive option may be (already) a bias towards Asia which has no other alternative than to buy Russian gas… unless China discovers important Shale gas reserves.

Investment climate should be improved

Economy is growing 3.8%. Capital outflows are still high although decreasing from $ 80 bn last year to $65 bn this year. There should be positive & important signs for investors.

State group boosting dividend is good push from PM Medvedev. Sberbank may be a good example. It has improved its corporate governance. The IPO was successful. Sberbank managed to secure anchor investors. As a consequence, it was oversubscribed.

Russia starts to lean a bit more East. Already today, the volume of trade is over $70 bn with China vs $ 60 bn with Germany.

In beginning 2013, there will trade in Rouble and Yen without converting into USD in between. Such monetary agreements will develop with Korea and Japan.

Although Western economies are still by far much bigger and in 2010 the EU was the biggest commercial partner of Russia with 48% of the total. But, the world has started to shift from the West in many respects, and that includes the financial world.

NEVERTHELESS, as an investor and talking to wealthy investors every day, I think Russia is too much looking West and is neglecting all Developing Markets (DM) investors: private & institutional.

The currencies of some of these countries such as Australia & Singapore are now used as reserve currencies at the regional level.

Russian business should talk directly to DM, not through New York and London. Russian business still works with investment banks… which are essentially US or UK… when these two countries effectively are very negative about Russia. So what does one expect when these Investment Banks talk to investors? They are generally not really keen on Russia.

DM investors are usually much more open minded towards Russia (India, Middle East, Asia) but they hardly know it! There is a huge lack of knowledge and perception They tend to be afraid about situation in Europe but they do not know Russian business as a potential alternative. There could be a task force and some kind of Ambassador organized and managed.

Last October 25 at the Valdai Club: “the crisis of the Euro is much deeper than just the debt crisis.  Euro was created for political reason and forgetting the technological level of the countries, the harmonisation of labour markets, political integration and a common language. One should have been more pragmatic. When the crisis happened, responses were inadequate. EU is not a true Federalism and has all inconvenient without the advantages”.

In fact, it seems V. Poutine favours the scenario of a break-up of the Euro.

Keeping the Euro has a cost:

In its History, Russian has never been as strong as when it accepted to look East. Actually, its relations with the West were an accumulation of wars, misunderstandings, humiliations… While looking East consolidates its strength, its stability and its wealth.

First of all, historically, most of the threats came from the West. If this statement is a basic clear understanding for any Russian, most of Western people see it exactly the reverse although… But the true disconnection between the West and Russia is recent. Conversely, every time Russia based its equilibrium and strength on Asia and Eurasia, it succeeded in a much easier way.

The East was also relatively easy to conquer. After the 1917 revolution, large lands were lost in the West but the East remained. More recently, none of the CIS countries joined a euro-Atlantic structure whilst the Western neighbours quickly joined the NATO although the USSR was no more a threat.

Recent partnerships with the east are doing well and remain promising:

Shanghai Cooperation Organisation: initially created in 2001 to fight against “separatism” and terrorism. This role becomes even more important when US retreats from Afghanistan. Since 2006, the SCO has an economic development role as well. Immigration from Central Asia is also an important element. The next step is a custom union.

The centre of gravity of Russia should go East and may be it already does:

Developing countries start to cooperate directly between one another with for instance Asia building ties in Africa directly or via the Middle East. LATAM is more a pure US playground. Russia should strengthen economic ties with Developing / Emerging Markets and not just for oil and gas. Russia can be more than a facilitator between the West and the East.

It is my view THE only country having the long-time acceptance on its soil for different religions and cultures, it has the long existing knowledge and partnership with major players such as India and China, it is a Pacific Ocean country and it has the natural resources these countries have so much appetite for.

It is now time that Russia accepts to rebalance from the West.

Sustainability 2021: a vital shift in the Middle East